The First Step to Freedom 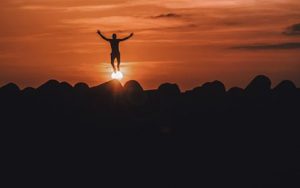 You have not yet resisted to the point of shedding blood in your striving against sin…
– Hebrews 12:4

From 1991 through 1998, I spent much time and effort trying to break free from the bondage of sexual sin. After years of failure, I finally took what would be the first step to freedom in early 1999. Here’s what it looked like:

I finally had enough pain.

I was 36 years old before the inner torment, shame, pain and emptiness of acting out overrode any of the short-lived pleasure lust had to offer. Prior to this time I had bought into the illusion that sexual sin could somehow fill in the gaps of my soul; that it was a source of life. After years of repeatedly shaming myself, wounding my wife, and damaging my relationship with the Lord, I finally came to the realization that lust was my sworn enemy, not my friend.

I got off the fence.

This meant I would take consistent, firm action the moment a lust thought hit my mind. If praying wasn’t enough I’d make a phone call. If a phone call didn’t win the battle I’d ask someone to meet me for lunch. Having had enough pain, I was desperate to do whatever it took to win the battle.

I took full responsibility for my problem with lust.

Although I had proclaimed love for Christ for years, in a moment of desperation over my depravity I wondered if I really knew Him. When I understood that His standard for sexual purity started in the heart, finding true freedom from lust became impossible for me to attain in my own strength, and I broke. Pride and self-effort had gotten me nowhere; I needed to trust the Lord with all my heart for what I needed to break free.

You have heard that it was said, `You shall not commit adultery’; but I say to you that everyone who looks at a woman with lust for her has already committed adultery with her in his heart.
– Matthew 5:27-28

After we make the decision to divorce lust, the battle gets harder.

Getting off the fence means the battle for sexual purity gets more intense, not easier. Our flesh screams when denied its lust-candy, and we literally go through withdrawals. Pain, anger, and other emotions we’ve medicated now surface, intensifying the pull to go back to lust. We feel the wretched emptiness we’ve avoided, and wonder what will fill this gaping hole. Will God be enough? Can He provide the life, joy and peace we’d asked lust to fill?

Then there’s the spiritual battle; we have an enemy who wants to keep us in bondage to lust. He doesn’t stop whispering his lies about sexual sin (it will satisfy this time… you’ve gone this far so you might as well go all the way… you saw a beautiful woman – you sinned!) and our worth in God’s eyes (you’re nothing more than a shameful, worthless sex addict – no one else sins like you do, especially other Christians) until we come to the place of accepting the truth.

We’re in a fierce battle that takes time and effort along with the help of God and others before we will win the war. We face a cunning enemy that knows our weak spots; he knows when to back off so we’ll get complacent, and when to attack. We must continually be on guard, especially in the beginning of the journey.

There is abundant hope; in time saying no to lust gets easier, and the temptations start to fall away like flies. New strength is found in the grace and power of the living God as we learn to allow Him to have all of us, ugly parts included. We expose every part of our lives to Him to allow Him to do what He wants. This can be fearful at first, but exciting later on as we learn to trust that He always has our best interests in mind.

“Resisting to the point of shedding blood” is hard, painful and flesh-crucifying.
In the end, the results are worth it.

Bio: Mike Genung struggled with sexual sin for 20 years before God set him free in 1999. He is the founder of Blazing Grace, a ministry to the sexually broken and their spouses, and the author of The Road to Grace; Finding True Freedom from the Bondage of Sexual Addiction (www.roadtograce.net).