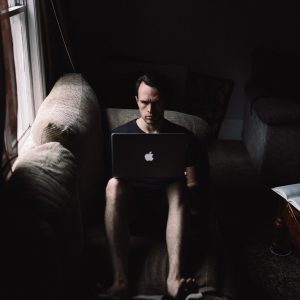 I had been quoting Scripture… At myself!

I was afraid of being seen. Of being exposed. I was keeping provisions for “works of darkness”… “for the flesh, to gratify its desires.”

I was not consuming Jesus, I was consuming something entirely different.

The flesh is such a ravenous thing: Always hungry, the more it eats, the more it grows, the more it wants. As Captain Barbossa said, from Pirates of The Caribbean, after he and his crew took Cortez’s cursed gold and began to spend it:

“The food turned to ash in our mouths, and all the pleasurable company in the world could not slake our lust. We are cursed men.”

You and I deserve to be thrust into the light, exposed as shameful abusers. To be mocked and maligned in our nakedness, before the world.

But Jesus was instead.

He didn’t sacrifice himself to shame you. He sacrificed himself so that he could know you.

He was abused for you. He was mocked for you. He is the only one who is able to sit in your shame and hopelessness with you. He went through the Cross so that he would know your darkness.

Jesus went through the Cross so that He could give you a resurrection.

It’s time to stop hiding in darkness. “The night is far gone, the day is at hand.” The food that we consume will continue to turn to ash. Our relationships will continue to be only skin deep. People are more than bags of flesh. It’s time to put on the Lord Jesus Christ — His Cross and Empty Tomb — and steward the image of God in others, instead of exploiting it.

We’re not 15 anymore. Time to grow up and put on Christ.